Imagine, for a moment, putting a member of the Iraqi Ministry of Planning next to an MIT researcher working on creating distributed micro-networks of peer to peer communication through cell phones. Now say: “You two – go work together for Iraq’s children!”.

Does this sound like an impossible task? The Iraqi is concerned about the unique challenges facing their operations. How to build trust in a government among a skeptical population base. How to tackle the problem of daughters being forced into early marriages, and thus never having access to a proper education. How to reduce violent crime by getting kids off the streets. And how to make policy decisions without access to good data, and difficulty coordinating among ministries.

Meanwhile the researcher is thinking about network modeling, asynchronous communication channels, and extracting meaningful information from a vast, complicated space of data.

Neither person has any domain knowledge of what the other person does or is interested in. Throw in a language and cultural barrier on top, and how can these two people possibly be able to work together effectively?

Well this is exactly what happened at the Innovations in Mobile Data Collection for Social Action in Iraq and the Middle East (tumblr, netvibes) workshop last week in Amman. The key to solving this seemingly intractable problem was, as it often is, the right people. See, it wasn’t just the technophiles and the Iraqis in the room. There was an incredibly broad spectrum of people ranging from the uber-techies, to the tech-for-dev crowd (like us and the Ushahidi guys), to the UNICEF crowd of devs and program managers, to the local and regional UNICEF experts, to the team of ministry officials from Iraq. What this meant was that there was a perfect bridge of communication between every different group, and information flew readily from end to end along this bridge. Everyone in the room contributed to this process.

During the conference’s excellent IGNITE talks, we got an overview of all the different projects being executed around the world, and a picture of how these projects succeed and fail and how they might be brought together began to emerge among the community. At the same time we got to see several of UNICEF’s programs, both tech and non-tech. The convergence of these ideas, with the goal of applying them to help Iraq’s children, was one of the primary objectives of the conference. The ministry officials were supposed to pick and choose from what they saw and decide how best to apply technology for the kids.

But it wasn’t working. The geeks were talking too fast. The translators, struggled with the excessive techo-babble and NGO-acronym-speak. The team from Iraq struggled to keep up. And the techies couldn’t understand what the the team from Iraq needed from them.

This was where the bridge came in. A group broke off from the main session with the goal of framing the discussion in a way that the Iraqi officials could relate to, and providing them an environment to communicate their needs that they were comfortable in. With this bridge in place, each party was able to reach that a-ha! moment where they understood how they could work together. 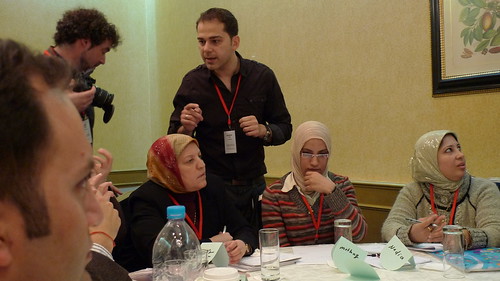 Talking tech with the team from Iraq

For the Iraqis it came after an excellent talk about the RapidSMS Malnutrition Project in Malawi by Merrick Schaefer, and then a second presentation (in Arabic!) from Jacob Korenblum on Souktel’s mobile offerings in the Middle East. After a vibrant Q&A session, several of the Iraqis approached me for a RapidSMS demo, and when they saw actual messages coming to and from their cell phones and then showing data on a map they got it. They started talking excitedly about how this could be used in their own programs, and I found it one of the most rewarding moments of the conference.

Likewise, in the last session of the conference the Iraqis presented their visions for potential systems they could build to help the Iraqi children. This time it was the geeks who lit up. A lively discussion of how to build the systems ensued, asking and addressing questions that spanned from the current state of cell phone coverage and costs in the region, to defining specific user and service models, to the unique-to-the-region questions around building the population’s trust and working in an environment where security is a huge concern.

Word visualization of the talks with the Iraqi officials

In this way we were able to expand our small tech-for-dev community’s core of interested parties to both the hard-core techies and the Iraqi officials, and successfully build the bridges of communication to bring the most unlikely of partners together.

Appendix: Huge thanks to Katrin Verclas and the Mobile Active team, as well as everyone at UNICEF Innovation for organizing the conference! Also we want to thank Thoughtworks for graciously allowing us to attend this excellent event.